Harmans were again delighted to take part in this year’s walk.  Eight members of the firm took part including members from both the Aylesbury and Chelmsford offices.

This year the team included my youngest daughter Elizabeth, she is a nurse at Guys therefore clinical negligence cases were not mentioned!  Maybe I hadn’t adequately described the walk to her as she turned up dressed for a stroll around the park complete with a large handbag.  More power to her though as we both completed the course in about 1 hour 50 minutes and she remained cool as a cucumber throughout.

Entertainment at the start of the walk included police on stilts and two people dressed up as privet hedges and a rather wonderful Citroen H van.

The weather had been a bit of a worry before the event, however, on the night it was perfect i.e. not too hot and not too wet!  Despite the enormous numbers of people taking part – what is the collective noun for a collection of lawyers (a ‘litigation’ perhaps?)  and the impenetrable log jams of walkers at the end of the Mall and around Buckingham Palace all of our team members completed the event with no apparent injuries.  This was also despite a stern exchange of views between car drivers, cyclists and walkers overheard at one of the road crossings.  As usual drinks were available at the end of the walk in The Law Society and The Knights Templar in Chancery Lane – you could either use your drinks token which were given out to each participant pre-walk or donate it back to the LLST and feel even more virtuous!

We were cheered round the course by hyper enthusiastic marshals, some of whom appeared to know the route and gave appropriate guidance.

It is perhaps a mark of the success of the walk that when I was returning to Marylebone at about 9.30pm to catch the train home there were still walkers on the route.  I just hope that they hadn’t started off at 5pm.

Over 9,000 walkers took part raising a record breaking £635,000 to date (and still counting) in aid of London’s sorely pressed law centres and free legal advice charities who help the vulnerable and those in need. 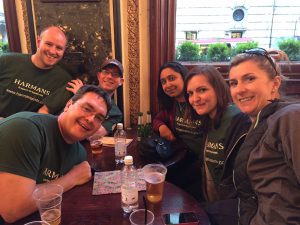 Some of Team Harmans rehydrating in the pub post-walk!